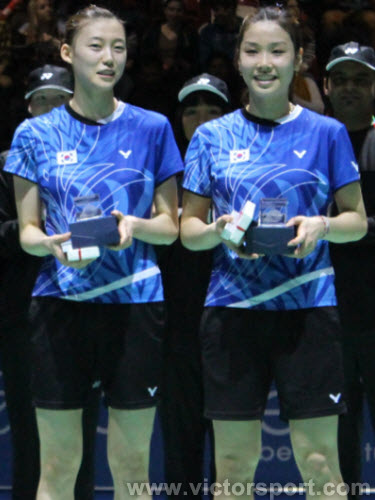 Kim Ha Na/ Jung Kyung Eun
The first final was the mixed doubles in which Fischer Nielsen/Pedersen faced China’s Zhang Nan/Tang Jin Hua. The match was close throughout, the Danes taking it by the narrowest of margins in two games, 22-20,21-19.
In the men’s singles final, China’s Du Peng Yu faced his teammate Wang Zheng Ming. Wang was only 12th seed in this tournamentbut played outstandingly to overcome Du 21-18, 21-18 and take the title.
Two South Korean pairs fought it out in the women’s doubles, Kim Ha Na/Jung Kyung Eun against Lee So Hee /Shin Seung Chan; Lee/Shin started brilliantly and were able to suppress their opponents’ attacks somewhat, at one point in the first game going into an 18-10 lead; however, Kim/Jung are very experienced and withstood the pressure as they clawed back the lead point-by-point, even saving five march points at 15-20, then going on to take the first game 21-21. After changing sides, Kim/Jung took full control of the match and took the second game 21-16 to take the match and title. 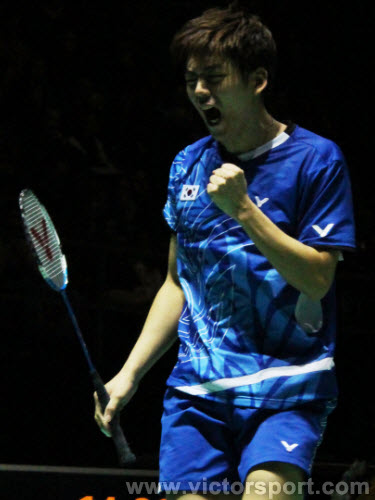 Ko Sung Hyun/ Lee Yong Dae
Wang Shi Xian, winner of the women’s singles title in 2010 at the Swiss Open, showed her determination to win it again; she beat Thailand’s young Inthanon Ratchanok21-16, 21-12 to take the women’s singles honors once more.
South Korea’s top men’s doubles pair Ko Sung Hyun/ Lee Yong Dae were up against China’s Hong Wei/Chai Biao in the final. In the first game, the Chinese kept the Koreans under pressure, forcing themto continually hit the shuttlecock up into the air thus exposing themselves to danger from the lethal smashes of the Chinese pair, goingdown 14-21. In the second game, Ko/ Lee stepped up the pace of their attack and took back the initiative, taking the game 21-18 to level things up game-wise. In the deciding game, the Korean pair made a few errors at crucial times,which upset their attack; they lost the third game 14-21, the match 2-1 and had to settle for second place.

Tournament table of the Finals of Swiss Open 2013：