In the first round of the German Open 2013, South Korea’s Ko Sung Hyun/Lee Yong Dae beat Dutch pair Ruud BOSCH/Koen RIDDER 21-13.21-19. Top seeded South Korean women’s singles player Sung Ji Hyun brushed Germany’s CAROLA aside with ease. Chinese Taipei’s Lee Sheng My/Tsai Chia Hsin took out the tournament’s fourth seeds Hashimoto/ Hirata by a wide margin and have a chance of being the tournament dark horses. In the women’s singles,Chinese Taipei’s Tai Tzu Ying had a tough match against Busanan Ongbumrungpan of Thailand but was still able to proceed to the next round after taking the match two games to one. 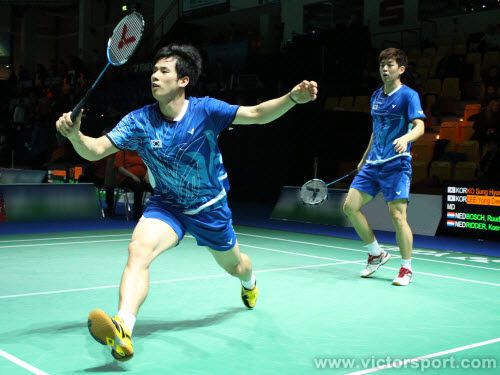 Ko Sung Hyun/Lee Yong Dae
Fancied home player Juliane Schenk claimed an impressive win 21-16,21-8 against top South Korean player Bae Youn Joo and will play France’s IGNES WARAN in the next round. Unless there is an upset she will make it to the quarter finals.
South Korea’s Ko Sung Hyun/Lee Yong Dae seemed to take time to get used to the court, needing more time than expected to dispose of their opponents; they will face Japan’s Takeshi KAMURA/Keigo SONODA in the last 16.
Chinese Taipei’s Tai Tzu Ying was up against young Thai player Busanan Ongbumrungpan. Both players took a game with relative ease and the match went to the final game. In the end, Tai wasted three match points before winning two points in a row to take the third game, and win the match 21-12,14-21,26-24.

Tai Tzu Ying
One match that deserves mention was that between Chinese Taipei’s men’s doubles pair Lee Sheng Mu/Tsai Chia Hsin, who are ranked outside the Top 50 in the world, and the tournament’s 4th seeded pair Hashimoto/ Hirata of Japan. The Chinese Taipei pair constantly put the Japanese under pressure when serving and receiving serve, creating opportunities to bring their outstanding attacking firepower into play, leaving the world’s 9th ranked pair at a loss; Lee/Tsai took the match by the impressive score of 21-15, 21-12 and will play England’s CHRIS／PETER in the next round; if there is no upset they should be able to make it to the last eight.
The German Open is now at the last 16 stage. To find out the latest tournament news, keep a close eye on the official VICTOR website: www.victorsport.com
( Edit by VICTOR Badminton )