Finals of the 2013 VICTOR KOREA OPEN 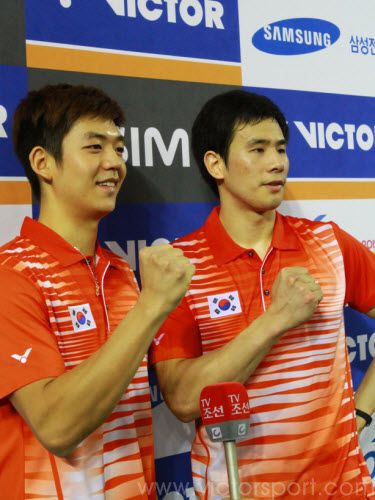 In the men’s doubles final Ko/Lee faced the diverse attacking play of the Danes; the South Koreans made quite a few errors in the first game, going down 19:21. In the second game there were fierce to and fro exchanges from the middle of the court as the two pairs presented a high class match for the audience to savor. Ko/Lee successively defended against the Danes’ attacks and took back the initiative, taking the second game 21:13 to level the match. In the deciding game, Ko/Lee really found their groove while the Danes gradually lost their rhythm, Ko/Lee taking the game with relative ease, the score 21:10, to take the match and their fourth title in succession, an impressive feat indeed.

After the match, Lee said they faced a lot of pressure before the match and he and his partner are really pleased to have been able to win the title in front of a home crowd. Their serving and receiving was done quite well today he said, and this was the key to their victory. Ko said that he is, of course, really pleased to have won four titles in a row but he will celebrate for just one day as the next day they will fly to Malaysia for the Malaysian Open Super Series where they hope their winning streak can continue!

In the final of the women’s singles Sung Ji Hyun faced one of China’s top players, Wang Shi Xian. At the 2010 final Sung was beaten by Wang 10-21, 23-25 and was determined not to be defeated again. At the start of the match, Wang stormed into a 6:2 lead but Sung kept her head and put the pre-match strategy of putting her opponent under pressure at the back of the court to exploit Wang’s relative attacking weakness into practice; this strategy was intended to, on the one hand, lower the quality of her opponent’s returns and, on the other, create attacking opportunities for herself. In the end Sung took the match 21:12, 22:20, taking revenge for the loss in 2010. 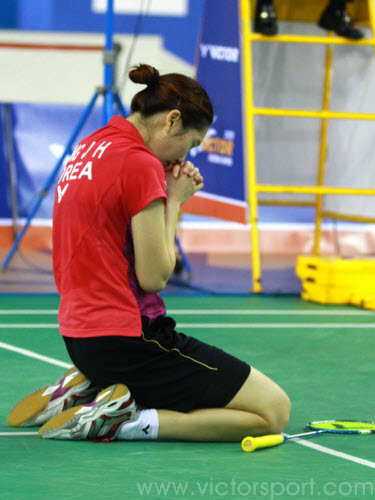 After the match, Sung's coach Chen Gang said that they had focused on a few of Wang’s weak points before the match; Sung had thoroughly implemented their strategy so that Wang’s attacking threat was successfully neutralized and this was the key to Sung’s win; he also said that this match could be a breakthrough point for Sung as she found self-confidence in this match; he expressed the hope that she can put up another outstanding performance at the Malaysian Open to prove that she is a world-class player.