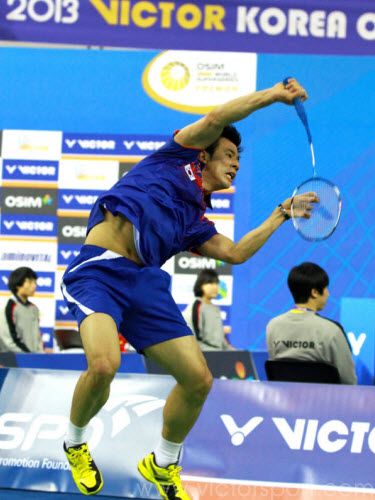 The Malaysians Goh/Lim tried to pin down Ko/Lee by attacking constantly but the excellent defensive play of the Koreans caused their opponents to use up a large amount of energy, allowing the Korean pair to take the match with relative ease, 21:16, 21:10.

After the match, the Korean coach said that Ko is faster around the court than Lee’s previous partner Jung Jae Sung and is not far behind him in terms of power, however, his play is bit inconsistent and easily ebbs and flows with his changing moods;if this weakness can be overcome this pair will be able to achieve an even higher level he said.

In the women’s singles, Sung Ji Hyun came up against a tough opponent, Thailand’s Porntip Buranaprasertsuk, however, Sung remained calmed and showed the bearing of a top player. Using a strategy of dropping the shuttlecock in the four corners and many wrist changes she kept her opponent running all around the court and took the match with ease 21:11, 21:7. She will play China’s Han Li in the semi-finals.

In the women’s doubles, Jung Kyung Eun /Kim Ha Neul faced one if China’s top pairs, Tian Qing/Bao Yi Xin; roared on by the home crowd, they overcame the challenge with an outstanding performance, taking the match 21:11, 21:18 to successfully reach the semis.

Second round of the 2013 VICTOR KOREA OPEN